After studying this unit you will be able to

Operations Management is understood as the process whereby resources (or) inputs are converted into more useful products or services. Operations management is more frequently used where various inputs are transformed into intangible services. Production management refers to transforming raw material in to finished goods, which are tangible in nature. However, we can see that production and operations departments go hand in hand. These two terms also used as synonyms in manufacturing units. But, we state that the ‘Operations management’ will cover such service organizations as banks, airlines, utilities, pollution control etc. 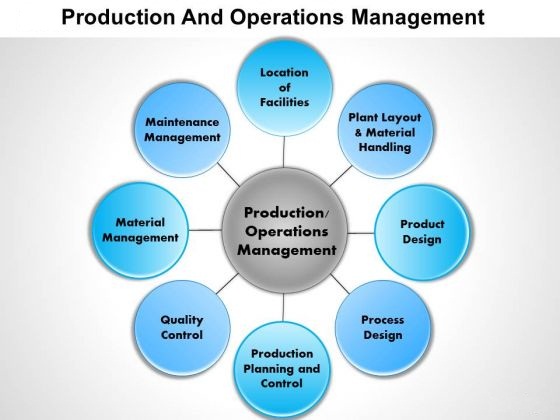 Manufacturing is the transformation of raw materials into finished goods for sale, by means of tools and a processing medium, and including all intermediate processes involving the production or finishing of component parts. It is a large branch of industry and of secondary production. Some industries, like semiconductor and steel manufacturers use the term “fabrication”.

Production means application of processes to the raw material to add the use and economic values to arrive at desired product by the best method, with out sacrificing the desired quality. We have three ways of Production, they are:

(ii)    Production by Integration: In this type of production various components of the products are assembled together to get the desired product. In this process, physical and chemical properties of the materials used may change. The examples are: Assembly of Two wheelers, Four wheelers and so on.

(iii)    Production by Service: Some products can be improved with a little effort of service. For instance, the chemical and mechanical properties of materials are improved without any physical change. The example for this is ‘Heat Treatment of metals’. In real world, a combination of above methods is used.

There are four dimensions for the definition of ‘Product’ i.e. customer point of view and production manager’s view, financial manager view and personnel manager’s view.

(i)    For a Consumer: The product is a combination of or optimal mix of potential utilities. This is because every consumer expects some use or uses from the product. Hence he/she always identifies the product in terms of the uses. Say for example-Soap can be identified by complexion, cleanliness of body, freshness, fragrance or health. etc. Because of this, many producers advertise that they

(ii)    For a Production Manager: Product is the combination of various surfaces and processes (or operations). This is because the production Manager is solely responsible for producing the product. He has to think of the various surfaces by which the product is made of, so that he can plan for processes by which a particular surface can be made and plan for required capacity of the facility by which the surface is produced. While planning he has to see that the required surface is produced by the best and cheapest method (optimally), so as to make the product to face competition in the market.

(iii)    For a Financial Manager: For him the product is a mix of various cost elements as he is responsible for the profitability of the product.

(iv)    For a Personnel Manager: For him the product is a mix of various skills, as he is the person who selects and trains the personnel to meet the demand of the skill to produce the product. In general we can define the product as a bundle of tangible and intangible attributes, which along with the service is meant to satisfy the customer wants.

Mr.E.L.Brech: ‘Operations Management is the process of effective planning and regulating the operations of that section of an enterprise which is responsible for the actual transformation of materials into finished goods.’

E.S. Buffa defines ‘Operations Management’ is the subject which deals with decision making related to production process so that the resulting goods or service is produced according to specification, in the amounts and by the schedule demanded and at minimum cost.’

H.A. Harding, ‘Operations Management is concerned with those processes which convert the inputs into the outputs. The inputs are various resources like raw materials, men, machines, methods, etc and the outputs are goods and services’.

The subject ‘production and operations management’ has its grass roots way back in the 16th century. One of the most memorable event is the industrial revolution started in the 1770s in England and spread to the rest of Europe as well to the United States. However, the industrial revolution changed the face of production forever with two principal elements: the widespread substitution of machine power for human and water power and the establishment of the factory system.

Before this time, product systems were often referred to as the cottage system, because the production of products took place in homes or cottages where craftsmen directed apprentices in performing handwork on products. Under the cottage system, it was usual for one person to be responsible for making a product, such as a horse drawn wagon or a piece of furniture, for the beginning to the end. Products were made of parts that were custom fitted to other parts. Because of this, the parts were not interchangeable. Generally, production was slow and labour- intensive. The following table depicts crucial evolutionary milestone in the subject ‘operations and production mangement’.

What Is Concept of Maintenance Management in Production Department?

Concept of Production Planning and Control the Operations Management

A service is an act or performance offered by one party to another. They are economic activities that create value and provide benefits for customers at specific times and places as a result of bringing desired change. According to Sir William B “Service refers to social efforts which includes the Govt. to fight five giant evils – wants, disease, ignorance, squalor and illness in the society”.

Service is an act or performance offered by one party to another. They are economic activities that create value and provide benefits for customers at specific times and places as a result of bringing about a desired change in or on behalf of the recipient of the service. The term service is not limited to personal services like medical services, beauty parlors, legal services, etc. According to the marketing experts and management thinkers the concept of services is a wider one. The term services are defined in a number of ways but not a single one is universally accepted. The distinct characteristics of services are mentioned below.

CHARACTERISTICS OF MANUFACTURED PRODUCTS AND SERVICES:

In the present era of cut throat competition laid in the market, the objective of production manager should be to produce goods at least cost and maximum satisfaction of the buyer. To meet this objective, the role of Production Manager in an enterprise is most important. The production manager has to administer a great variety of activities. Managers also has to respond to other forces from the external environment such as government regulations, labour organizations, as well as local, regional, national and international economic conditions. Thus, managers have to pay more attention not only to what their customers might buy but also increase in government regulations and behavior of the consumer and environmental protection groups. The duties of Production Manager in general can be classified as given below:

In this unit we have discussed about the concept of operations and production management. A production function can be defined as the specification of the minimum input requirements needed to produce designated quantities of output, given available technology. The relationship is non- monetary, that is, a production function relates physical inputs to physical outputs. In practice, top- level managers can use these different techniques. We can say that production management is an applied art than the theoretical science.